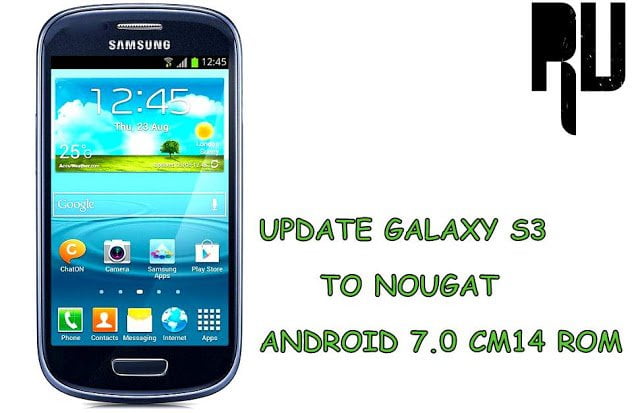 Do you want to Update Samsung Galaxy S3 to Nougat 7.0 N ? And want to Download CM14 for Galaxy S3 ? If yes then you are at right place . Today we are here with the Guide to Install Nougat 7.0 on Galaxy S3 .
Samsung Galaxy s3 was the first smartphone from Samsung in S series which got huge popularity , The smartphone was launched in 2012 with android 4.0.4 Ice cream sandwich out of the box , Later on Samsung pushed android jellybean update for the device but after the android 4.3 update no further updates were pushed to the device . Due to average hardware and less ram it is not possible to Get official nougat 7.0 update on Samsung galaxy s3 however still we can use Nougat 7.0 custom rom for galaxy s3 .
Android N 7.0 is the latest operating system and it comes with many new features like Multi window support, Quick switching Between apps, System Ui tuner and many more features . The samsung Galaxy S3 comes with a Quadcore processor and 1 gb of ram and having such low processor it is not possible to officially update Samsung galaxy s3 to android 7.0 N nougat . But still there are lot custom roms by which you can enjoy Nougat 7.0 on Galaxy S3 . Today we are here with the Best Nougat 7.0 custom rom for Samsung galaxy S3 . So we will use CM14 for Galaxy S3 to update it to Latest android version .
Features of Cyanogenmod 14 for Galaxy S3 are :-
Related : How to Update Samsung Galaxy S4 to Android N 7.0 Nougat .
Before flashing the custom rom on the device there are some requirements and points you have to take care of :-