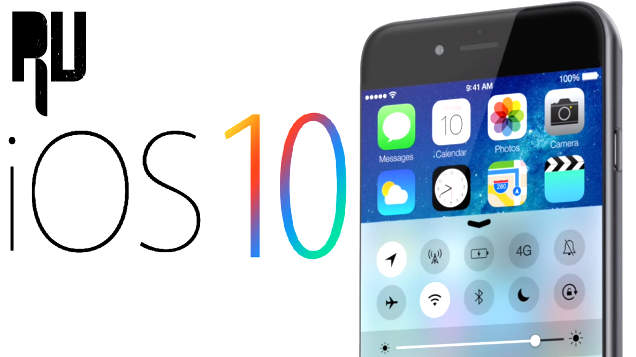 Do You want to know the ios 10 New features and ios 10 release date in India then you are at right place . Apple recently launched their ios 10 in Apple WWDC 2016 , According to apple this is the biggest and most huge ios Os upgrade upto date. Today we are here with the guide on Apple ios 10 Supported devices, Launch date and new features .
Apple is well known for new ideas and innovations in their products and thier Os as well and this time apple is here with the New ios 10 os update which was announced on 13th june in Apple WWDC 2016 . The Os is the successor of the ios 9 which was announced almost 1.5 year ago . So today we are here with the New features of ios 10 and Release date of ios 10 in india . As we already mentioned earlier that according to apple this the biggest and Huge update till date so it is pretty much obvious that the new operating system from apple will get a plenty of new features and apps . So here is all what we know upto now . In The ios 10 Apple Has redesigned the lockscreen of Apple iphone and apple ipad . Just for a info apple has changed the lockscreen design and pattern after a long time of 9 years . This is the first reason why ios 10 is considered as the biggest update . For those who love Slide to unlock the features is still available .
Coming to the notifications , In the ios 10 you can simply use your 3D touch to reply to messages direct from the notification . This feature can be used on any apple app .
Ios 10 New Widgets .

The new ios 10 comes with widgets inspired from google’s Android os . The new widgets allow you to open the camera direct from the lock screen just by swiping right . When you swipe the screen to left the news section from apple gets opened . Believe it or not but Siri is something which android users miss the most . According to Apple around Two billion requests are made to siri every day which is Impressing . Being the one of the biggest feature of Apple they have updated it with many more new features in the new ios 10 .

Whats New In ios 10 Siri ?
Yeah Good question ” Whats new in the Siri in ios 10 ” ? . So now with siri you can give commands to reply to your texts in the apps like whatsapp , Wechat , Hike and almost every app . The new ios 10 comes with a new photo app which organizes the photo with the help of computer vision .
The new interference and feature includes organizing the photos in different albums by recognizing faces and several aspects .
The New app also allows user to combine photos in one album by the help of map and reading the location of the pic where it was captured .

The apple maps is also updated in the new Os update . One of the biggest addition in the Apple maps we have seen is the traffic route option . This feature was added in google maps a long ago and now it is added in Apple maps .
Vehicles that support Apple car play also get suggested different routes having no or less traffic .
Ios 10 Apple Music :- The Apple music is totally redesigned in the ios 10 . Now the app comes with much cleaner and well mannered design . The app also supports lyrics now ( Not for all songs but for same ) .
You can also add songs in your playlist now .
ios 10 Apple News :-
Around 50 Million readers read apple news every month so with such huge readers Apple has redesigned the apple news as well . Now you can choose between personalized topics .
Messages :-
There are no changes in the look of messages section but when it comes to features of the messages in ios 10 then for sure it has got something impressive .
Apple has designed bigger stickers somewhere identical to Hike messenger . Many new effects like bubble effects  which lets you send your text to the other person using iphone have been also added in the messages in ios 10  .
Not only this but we can expect many more feature upgrade in the coming updates as apple has opened the messages app for developers .
Phone :-
One of the major upgrades in the Phone section of ios is that now all the voice mails will be automatically converted in text .
Calls from apps like whatsapp can be directly answered from the homescreen .
World’s Most expensive Smartphone Price and Specifications .

Yeah a Good question , What is the ios 10 india release date . So for those who are developer and want to check their apps on iphone can download ios 10 Developer beta 1 and update their iphone to ios 10 .
Here is How to Do that :-
Just go to settings of your iphone .
Now go to general settings .
Open Software update .
Now you will see a ios 10 update . The beta update is only for Developers and the public version of ios 10 will be released in july 2016 .
Ios 10 Supported Devices :-

So with so much changes and a big list of upgrades the Ios 10 is surely one of the best and biggest iphone operating system update upto now .
Thats All This was our guide on The Apple ios 10 features , Release date and Supported devices .