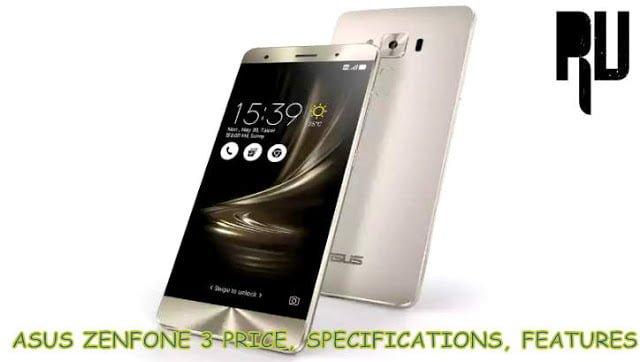 Asus has launched the Zenfone 3 series in india , Zenfone 3 is the successor of Zenfone 2 which was a popular smartphone in india because of its Budget price and bundles features but with the launch of the asus Zenfone 3 in india its doesnt seem that asus is a Affordable smartphone manufacturer anymore . Asus Zenfone 3 Deluxe which is the top end variant of Zenfone 3 is priced at 62,000 which is even more then apple iphone . So let us discuss about the Asus Zenfone 3 Series Price, Specifications . Asus Zenfone 3 deluxe is the Flagship smartphone from Asus in the Zenfone 3 series . The Zenfone 3 deluxe is powered by a Qualcomm snapdragon 820 Processor and 6 Gb of ram , With Such powerful processor and 6Gb of rams the Zenfone 3 is a Device that can handle heavy games and multitasking easily however there are more factors involved in a performance of a smartphone like Ram management, Performance tweaks and much more .
The Asus Zenfone 3 Deluxe runs on Zenui 3.0 based on android 6.0 m Marshmallow , being the flagship smartphone from the company future android upgrades are expected .
There is 64Gb of onboard storage on the device which can be expanded upto 246Gb by installing a microsd card .
The smartphone comes with a 5.7 Inch Full HD display with 386 Pixels per inch and 1080X1920 Pixels resolution . For protection of the display there is corning glass 4 protection on the display which can protect the Zenfone 3 deluxe from Unwanted scratches and Cracks . The corning gorilla glass 4 is upto 40% more strong then the Gorrilla glass 3 .
The Asus Zenfone 3 Deluxe comes with a 23 Megapixel primary camera which comes with Laser and phase detection technology and there are more features like Autofocus, Face detection . The smartphone comes with Dual Led Flash . Coming to the front camera so there is a 8 Megapixel camera which can record videos at 1080p resolution .
The Asus Zenfone 3 Deluxe is priced at 49,999, And the variant with Snapdragon 821 processor is priced at 62,999 Rupees . Asus Zenfone 3 Comes with a 5.5 Inch display having Pixel density of 401 ppi this is as same as the Zenfone 3 laser . The Display comes with 1920X1080 resolution which makes it a full hd display smartphone . There is corning gorilla glass 3 coating on the display protecting the smartphone from scratches .
The Zenfone 3 ZE552KL is powered by a qualcomm Snapdragon 652 octa core processor clocked at 2.0Ghz , Along with Octa core processor there is 4Gb of ram . For better graphics there is adreno 506 Gpu .
The Zenfone 3 ZE552KL  Comes with 16 megapixel primary camera which comes loaded with features like :-
For capturing selfies there is a 8 megapixel camera unit which comes loaded with several filters and autofocus feature .
The Zenfone 3 ZE552KL is priced at 27,999 Rupees .
So this was our Guide on the Asus Zenfone 3 series price, specifications and Features .