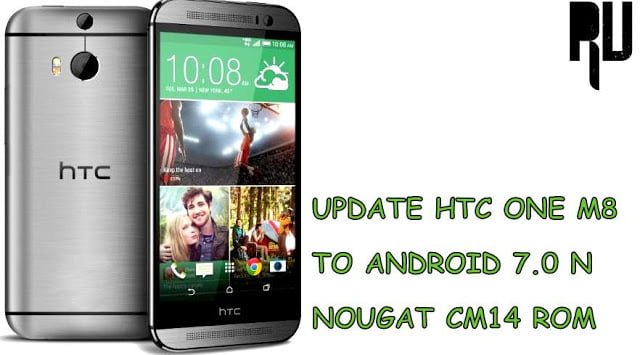 Do you want to update HTC One m8 to Android N 7.0 Nougat ? Want to Download CM14 for HTC One M8 ? If yes then you are at right place . HTC One m8 is the flagship device from HTC which was launched in September .
The smartphone came with android jellybean but later on HTC rolled out Android 6.0 marshmallow update for the device . Being a flagship device you can expect official android nougat 7.0 update for HTC one m8 . The smartphone comes with a Powerful snapdragon 801 processor along with 2GB of ram and that is one of the biggest reason that it is one of the first HTC smartphone which Got Cm14 rom . Android 7.0 Nougat is the latest android version which comes with many new features like multiwindow support, Battery tweaks and much more . So lets start the guide on how to install android 7.0 nougat in Htc one m8 . CM14 aka Cyanogenmod 14 is a nougat 7.0 based custom rom , The custom rom comes with all features of Android nougat . As this is a custom rom so it may contain some bugs , So we will recommend you to always flash the latest build of the custom rom to solve Bugs . Some of the main features of the CM14 rom for Htc One M8 are :-
Related : List of Devices getting Cyanogenmod 14 Update .
What works in the rom ?
Pre requirements before Installing CM14 rom in HTC One M8 :- So this was our guide on How to update HTC One m8 to android Nougat 7.0 , I hope you liked Cyanogenmoad 14 for Htc one M8 .