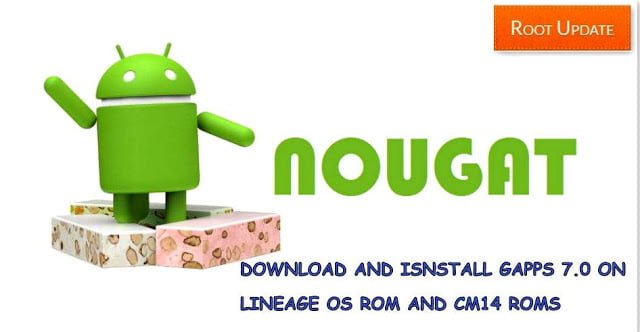 Download and install working gapps of android 7.0 ,7.01 nougat 2017 for lineage os 14 CM14 custom roms . Many custom roms Like the CM14 / Lineage os doesn’t comes with Gapps 7.0 and not only CM14 but other roms also like the AOSP doesn’t come with google apps nougat Gapp 7.0 So today we are here with the guide to download stock Gapps 7.0 For CM14 And lineage Custom roms

Gapps is one of the most important thing of a android smartphone because without gapps you cant use any thing your device , And not only this but finding a Working Gapps 7.0 for lineage os roms and nougat rom is also difficult because every mobile has different processor and ARM so it is necessary that you install Right Gapps file in your smartphone to avoid issues .So Before you Download Gapps 7.0 and install it on your device you should know what Gapps are why we should use GAPPS On Lineage os rom and Cyanogenmod 14 roms .

Gapps 7.0 also known as google apps 7.0 is a package of certain apps like chrome, Google play store, google maps and many other important apps . When we buy smartphone the gapps comes pre installed in the device but when we install a custom like CM14 or Lineage os or any other so in that case there is no gapps installed So it is required that you download gapps 7.0 and then install it on your device

Android Nougat 7.0 is the latest android version from google and this version of android It is the successor of Android 6.0 marshmallow. The new os comes with many new features and updates like the multiwindow feature which allows to use other apps in the same window . When a company dont releases official nougat update for a device users start installing other custom roms on their smartphones and almost all custom roms dont have GAPPS Pre installed .So lets start our guide on Download and Install GAPPS 7.0 On Lineage os rom and CM14 roms These Gapps Are for custom rom Like  Lineage os rom, CM14 And Aosp Hence you can Flash them via Cmw recovery or you can just extract and use them . It is Recommended to be on High Speed internet To Download these 7.0 Gapps because they are large in size and downloading them from Low speed internet will take a Lot time

Before Downloading Gapps for Cyanogenmod 14 Lineage os  Here are Some Devices That These Gapps 7.0 CM14 Package Will Support .

So this is the full package of Gapps 7.0 for Lineage os rom, CM14 roms and all other Nougat custom roms . This GAPPS 7.0.zip file contains all apps like google playstore, Maps,Keyboard and everything . The file size is around  490 mb .

So After You Download Gapps you have to install them on your android device, Below is the guide on How to Install GAPPS on Lineage os rom and CM14 roms

How to Install GAPPS 7.0 On Lineage os rom So this was our guide to Download Gapps 7.0 Google apps for lineage os, Cm14 and All nougat custom roms . If you face any kind of difficulty please feel free to comment down below