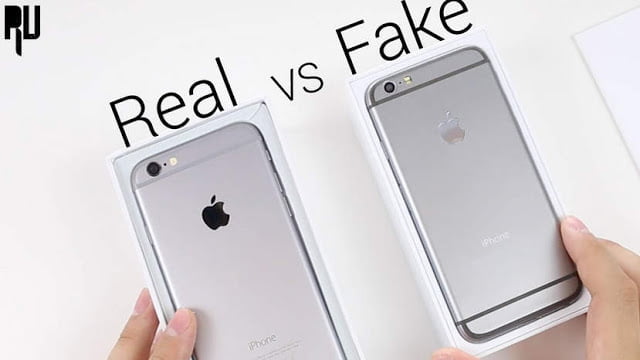 How to Differentiate between A Real and Duplicate Apple iPhone – Know if your Apple iphone 6s Plus,Iphone 6s,Iphone 6 Plus,Iphone 6,Iphone 5,Iphone 5s,Iphone 5c is real or fake .

Owning a Apple iphone is always a matter of pride for every user and just because the reputation and quality of apple products people blindly buy apple iphone without even inquiring if the product is real or not .
You may also like :- How to install apple ios on any android smartphone .
Seeing the popularity and faith of users in apple iphone many smartphone makers company created  the Very same look a like of iphone . The clone’s are so Well created that Hardly any one can differentiate between the real one and clone .
So if you are planning to buy a apple iphone then must read this guide to Know if the iphone you are going to buy is a real one or fake one and i am sure this guide can save your Money from investing it in a wrong Product . How to Know if my apple iphone is real or A Clone ?

Actually knowing the difference between the real iphone and the clone is seriously very difficult because the clones are so well crafted that they look more good then the original ones but still there are many factors which are enough to prove them fake .
Usually a customer while buying a product or a apple iphone focuses on the Design of the phone and accepts that the product is real and genuine and leaves all factor’s which are important and can help you differentiate between a real iphone and a fake one .
You may also like :- How to use whatsapp web with a apple iphone .
Sometimes the customers are fooled by the shopkeepers and the local retailers,and sometimes the costumers get fooled by themselves by seeing  The low price of the iphone and it is pretty much obvious also who would not wont to own a apple iphone worth Rupees 50 K at only 10K But remember that The Lure of Low price may result in Damage .
So if you own a iphone and it is in warranty period or planning to buy a apple iphone then Follow all the steps below and carefully cross check them with your Iphone .
Before Going to the Guide i would seriously recommend you to buy Apple iphone from E-commerce websites instead of local retailers , The products you buy from online shopping websites are 100% genuine and quality checked and also remember to choose a trusted online website . How to check if My apple Iphone is Real or a Duplicate ? The first and Major difference to spot the real and Fake iphone is Its Box .
Have a look at the image you will see two boxes The build and quality of both the boxes are almost same but there is a Slight difference in the sizes of the box the real box is compact whereas the Fake on is larger .
You may also like :- How to capture DSLR camera like images from a Apple iphone .
Coming to the main difference .
Apple always Print its Logo and Text with Grey(Black) colour Whereas the fake one is printed with Orange colour .
So this was the very first difference with which you can easily differentiate between the real one and fake one .
Now after opening the box we noticed some changes which are very hard to notice for a common man .
Inside the box of apple iphone Know if your apple iphone is Original or fake , Coming to the accessories of the apple iphone The real one and the duplicate one .
The build quality and the design of the earphones , The charger and the Data cable is Same in both the Products the only way to find the difference is Hearing songs in the Earphone .
The second and the main difference we found was In the original there were three separate spaces provided for all the three accessories whereas in the fake iphone there was only two spaces provided one for The charger and the second for earphone and the data cable was placed just below the Earphone , so by the design of the boxes you can easily find if the iphone is real or fake .
After The Box Lets Come to the Main Part which is Differentiating  between both the devices .
Difference between real apple iphone and the fake one . Know if your apple iphone is real or fake , The Thickness of real iphone is fake iphone is almost same but when clearly and observed from near you can notice that the real one is slightly more sleek and thin .
The volume rockers of both the real and fake is same , To know the difference one has to use it for a while . We noticed that the buttons in the real apple iphone were soft whereas in the fake they were hard and one need to apply more force . The vibration button of the the real iphone was easy and soft to operate whereas in the fake one it was hard .
The keys of real iphone make sound when we use them whereas there was no such sound in the fake one .
Now after back side lets move forward to the front .
Difference in Display of real Apple iphone and Fake apple iphone . 8 thoughts on “How To Know if Your Apple iPhone is original Or Duplicate .”