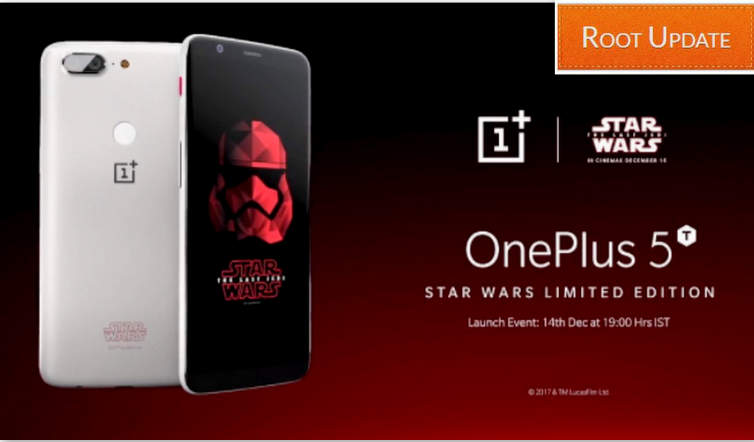 Oneplus 5T star Wars limited Edition is launched, Last month OnePlus had launched their highly anticipated upgrade of the OnePlus 5, with the name of OnePlus 5T with the major upgrade being the all-new 18:9 bezel-less display. This month they bring something great for OnePlus and Star Wars Fans, presenting the OnePlus 5T Star Wars Limited Edition!

Why a new Device?

On 13th of December, Star Wars: The Last Jedi, and for movie promotion, Star Wars collaborated with OnePlus to release this one of a kind Limited Edition Smartphone. OnePlus has already announced that this phone will only be available in India until the stock last to give its owners a true limited edition experience. Apart from the phone, owners will also get a limited Star Wars themed phone case inside the phone which is also one of its kind.

As for the internals and specs of the phone, everything is exactly the same. We see changed only in the outer and the Android of the smartphone. Starting off with Android, it comes pre-installed a very minimal Star Wars theme which makes everything Black and Red themed with Star Wars Wallpapers. Coming to the device itself it has a white marble finish which looks very cool, and they have colored the notification slider red in this limited edition. On the bottom of the back, you’ll also see the Star Wars branding which makes this phone truly one of a kind.

OnePlus has announced that this Limited Edition phone will come only in one storage variant, which is the 8GB RAM and 128 GB internal storage model. For the pricing, it’s 1000 costlier than the original OnePlus 5T at 38,999. But we say that this higher price tag is totally worth it whether you are a Star Wars fan or not. Users can buy it from Amazon.in at 0000 Hrs December 15th, 2017 IST from this link.

We hope to see the huge response on this device from OnePlus as well as Star Wars Fans. Also, we wish to see more and more brands making exclusive and cool gadgets like this one and let us know Which Version of the Oneplus 5t is your favorite one down in the comments section. If you loved this post, consider sharing it on social media and check out our other posts for updated tech content!