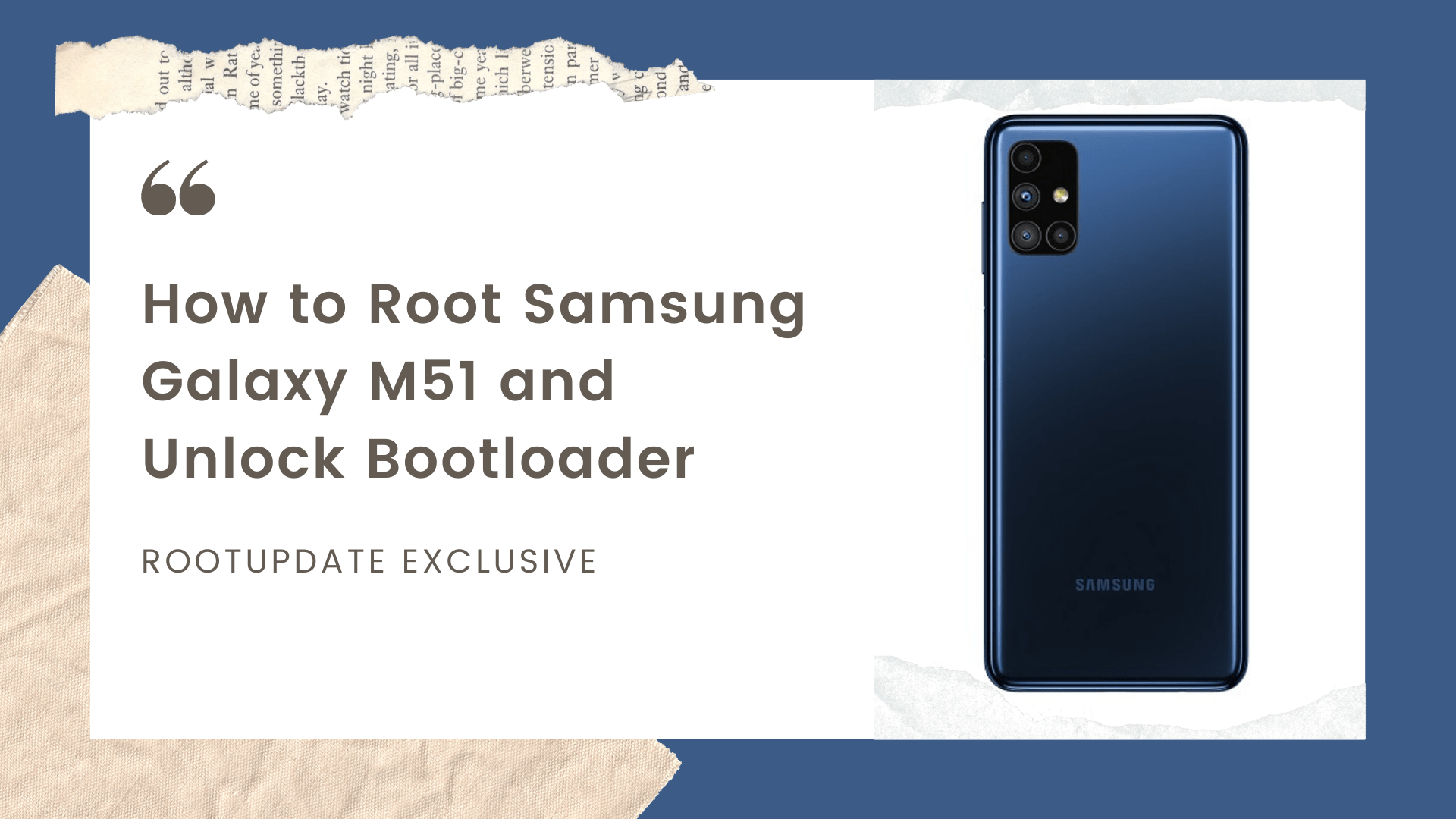 Root Samsung Galaxy M51 and Unlock Bootloader: Samsung has announced the M-series of smartphones targetting the Indian youth. The devices from the M-series directly go head-to-head with Redmi’s and Realme’s of the world and they have stood a strong competition with their amazing offerings like Galaxy M31 and M31s and etc. Back in September, the company has announced its Galaxy M51 smartphone and this has to be the most expensive M-series device until now.

The device packs in a massive battery and a Qualcomm SoC. And it has been said on several occasions that the Galaxy M51 has to be the best of what the M-series has to offer, period. Unlike every time, this device shines in almost all the aspects and can outperform any smartphone in the market, when it comes to battery life. But, not everything has to be with a battery. Despite having good specs, the device sounds pretty plain because of various reasons.

Samsung Galaxy M51 was launched in the month of September 2020. The device features a 6.7-inch Super AMOLED panel with a resolution of 1080 x 2400 pixels. The aspect ratio of this display is 20:9 and the screen to body ratio stands at 86.66%, thanks to the punch-hole display notch. The pixel density here is 393 PPI and the devices boast a 60Hz display refresh rate.

Under the hood, the device is powered by Qualcomm Snapdragon 730G SoC. Adreno 618 handles the graphic duties here. Snapdragon 730G is a fast mid-range SoC that integrates eight cores divided into two clusters. Fast performance clusters here contains two ARM Cortex-A76 cores clocked at 2.2 GHz each and a power efficiency cluster with six small ARM Cortex-A55 cores up to 1.8 GHz each. The device comes with 6 GB of RAM coupled with 128 GB of onboard storage. Do note that the storage here is expandable up to 512 GB.

As for the optics, the device comes with a Quad-rear camera setup. The primary sensor here is a 64 MP unit with f/1.8 aperture with 26mm focal length and 0.8um pixel size. The secondary sensor is a 12 MP F/2.2 ultrawide-angle sensor with a 14mm focal length and 1.12um pixel size. The other two sensors are useless and not worth discussing. But to mention, the third sensor is a 5 MP macro camera and the fourth sensor is the useless 5 MP depth sensor. On the front, there is a 32 MP sensor with an F/2.2 aperture.

Samsung Galaxy M51 runs Android 10 out of the box with One UI 2.5 skin on top. The side-mounted fingerprint sensor, barometer, accelerometer, gyro, and etc takes an account here and all this is backed by a whopping 7000 mAh battery with 25W fast charging support.

How to Root Samsung Galaxy M51 and Unlock Bootloader

Root Samsung Galaxy M51 and Unlock Bootloader — Rooting might sound very easy to perform, but these days, smartphones are getting more and more secure which essentially means, it just does not only take one application to root in completely, like the olden days. These days, unlocking the bootloader is a mandatory thing to do when it comes to rooting your device. Without bootloader unlock, there is no way that you can root your device, regardless of the OEM. The whole point here is rooting not only voids the warranty, reduce the security of your device, but it also is a take consuming process.

But then again, rooting is fun. Once you unlock the bootloader and root your device you can use various audio, camera mods which is bump up your device’s performance to a whole new level. Now, with that said, let us dive into the process of Root Samsung Galaxy M51 and Unlock Bootloader, shall we?

By this time, you might have already understood that bootloaders usually come locked out of the box. If you are a Pro Android user and are planning to install or flash any custom ROM or Mod for that matter, you will need to unlock the bootloader of your device. With that said, let us now discuss How to Unlock Bootloader of Samsung Galaxy M51.

How to Unlock Bootloader of Samsung Galaxy M51

How to Root Samsung Galaxy M51