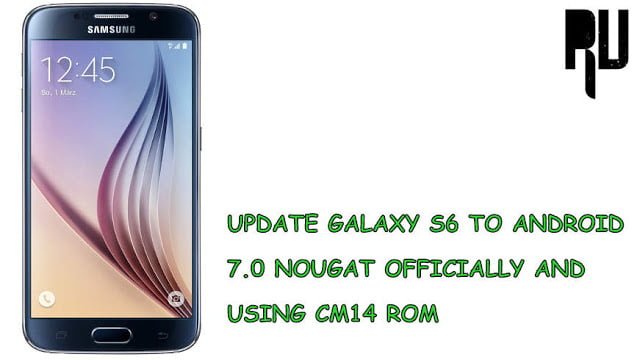 Do you want to Update your Galaxy S6 to Android Nougat 7.0 ? If yes then you are at right place . Today we are here with the guide on How you can update your Galaxy S6 in latest Android 7.0 Nougat . Samsung galaxy S6 is one of the most popular Samsung devices and also it is among est the very first devices that used the corning gorilla glass 4 even at the back side .The Samsung galaxy s6 is a 5.1 inches device with full hd screen, the smartphones comes with Exynos 7420 octa core processor and 3Gb of ram making multitasking easy, Being one of the most popular devices the S6 is also in the List of Devices expected to get nougat update . Not only this but there are also high chances of S6 getting official nougat update . So in this guide today we will tell you How to Officially update Galaxy S6 to Android 7.0 Nougat and How to install Cm14 in galaxy S6 . As already mentioned earlier that being one of the most popular Samsung device there are high chances that their will be official nougat update for galaxy s6 . So in this guide we will tell you How to officially update s6 to nougat :-
Please Note that Samsung hasn’t yet released the nougat update for Galaxy s6 . So you will be able to update the device only after company releases it . You can check for Updates on Samsung’s offical Firmware website

There are two ways with you can update any device . One is updating by official rom also known as Stock rom and the second one is by installing Custom rom . So to update galaxy s6 we will install Cyanogenmod 14 on Galaxy s6 .
CM also known as cyanogenmod is one of the best custom rom, CM14 is the latest rom based on android 7.0 and it also comes with many feature . As it is based on Android 7.0 you will get all features of nougat and in addition you will get features of a custom rom as well .some of the main features of the custom rom are :-
List of Samsung Device getting official Nougat 7.0 Update .
As this is a custom rom so there are some points and pre-requirements you have to follow before installing cm14 in s6 :-
List of Custom rom for Popular android phones .
So lets start the guide on How to install CM14 rom in Galaxy s6 . How to Update Galaxy S6 to Android 7.0 Nougat officially
As this is a custom rom so there are some chances that you might face some bugs and to resolve the problem check for updates daily by opening the updater app in your device or Settings > System updates .
So this was our guide on How to update samsung galaxy s6 to android 7.0 Nougat, I hope you liked cm14 for galaxy s6 .