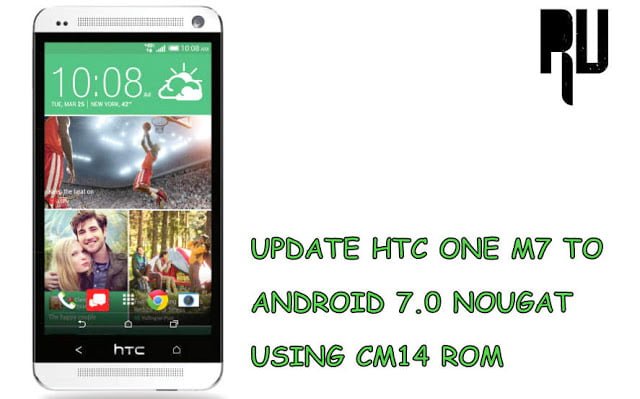 Now M7 users can Update HTC One M7 to android 7.0 Nougat by Using CM14 for Htc One m7 . In this guide we are here with the Nougat update for Htc one m7 . Earlier we also shared the guide on Update Htc One m8 to Nougat and today we are here with the Upgrade for Htc m7 .
Htc One m7 was launched in 2013 and it runs on android jellybean However the company is planning to roll out official lollipop upgrade for the Device . The One m7 is a old device but it comes with a Pretty decent hardware and thats the reason developers have created a nougat rom for the Device , Android 7.0 Nougat is the latest android version and it comes with many new features and upgrades . One of the interesting feature of android 7.0 is the Multi-window support and System Ui Tuner which allows you to do multitasking and Change the Looks of Smartphone without installing any third party application . So lets start the Guide on How to Update Htc one M7 to android Nougat 7.0 . How to Install CM14 Android Nougat In HTC One M7 .

As we already mentioned earlier that this device was launched in 2013 and being a old device we dont expect any official upgrade coming from the Company , So to update we will use a Nougat based custom rom . Cm14 also known as Cyanogenmod 14 is based on android nougat 7.0 and it comes with almost all features of the new os , In addition you also get features like :-
What is working in the rom ?
Related : How to root android Device without PC .
Prerequisites :- How to Update Galaxy Grand 2 to Android 7.0 Nougat officially
Screenshots of Nougat 7.0 Update on HTC ONE M7 :- So this was our guide on How to Update HTC ONE M7 to android 7.0 Nougat , I hope you liked our guide .