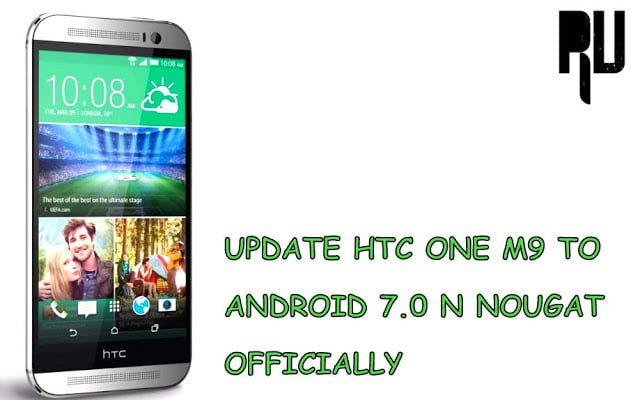 Do you own a HTC one M9 ? and want to update Htc one m9 to Nougat officially ? If yes then you are at right place . Today we are here with the Nougat update for Htc m9 .
HTC one M9 is a flagship device of Htc and the device was launched in 2015, And Now company has started rolling out official update for the device . The Device comes with 5.0 Inches screen and 441 ppi. Under the hood there is snapdragon 810 processor coupled with 3Gb of ram which makes this a perfect multitasking smartphone . The One m9 is a successor of Htc One m8, Being the flagship device Htc is rolling out official nougat update for Htc one m9 . Android 7.0 Nougat is the latest version which comes with many features . The best feature of android nougat 7.0 is the multi-window support which lets you do multitasking without leaving any app . So lets start the guide on How to update Htc one M9 to Android 7.0 Nougat . Htc one m9 is one of the very first devices that got the official nougat 7.0 Update from company, There are many smartphones in the List of Devices getting official Nougat update . As this is the official update so you dont need any special requirements for this guide, However still there are some points you should follow before proceeding to the guide :-

How to Officially Update HTC One M9 to Nougat 7.0 .

Thats all !!! You have successfully update Htc one m9 to android 7.0 . As this is the official upgrade so you will get future Ota updates from the company . The first boot will take around 5-6 minutes to complete and it normal . To check if your device is successfully Updated or not just go to settings > About phone and check the android version . If it is 7.0 Then you have successfully installed the Update file on the device .
So this was our guide on How to Update Htc One m9 to Android 7.0 Nougat, I hope you liked our guide .