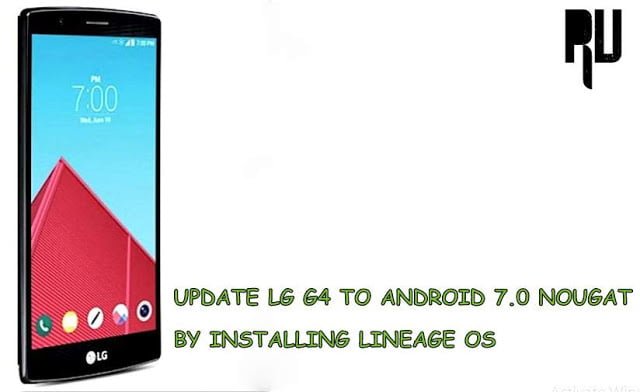 Do you want to Update Lg g4 to android 7.0 nougat ? and want to install lineage os on Lg g4 ? if yes then you are at right place . Today we are here with the Official Nougat update for Lg g4.

Lg G4 was launched in 2015, The device comes with a 5.5 inch screen with 72.5% screen to body ratio and 538 pixel per inch density . It is worth mentioning that the device comes with one of the best vibrant and bright display. For protection of the display there is a corning gorilla glass 3 coating on the top which protects it from scratches and cracks . The smartphone comes with Snapdragon 808 hexa core processor and 3gb of ram . To capture images there is a 13mp camera unit at the back and a at front there is a 8mp shooter . Lg G4 was launched with Android lollipop but after then company released a marshmallow update for the device and after that no further updates were given to the device . So in this guide we will show you How to Update Lg g4 to android nougat 7.0 officially by installing Lineage os rom .

Lineage os is a all new custom rom, The rom came in development after cyanogen os closed its all services, nightly builds and Updates on 30th and users who are using cyanogen os will no longer be supported . So Lets start the guide on How to Update Lg G4 to nougat . As mentioned above that lineage os is a all new rom and it comes with many new features . The best thing about Lineage os is that it is based on the latest android nougat and also it comes with the much popular multiwindow feature which makes multitasking easy . Some of the features of the Lineage os rom for Lg G4 are listed below :-
Before you update Lg g4 to android 7.0 nougat make sure you follow steps given below :-
List of Nougat custom rom for popular android devices .
As this is the official lineage os rom for Lg g4 so almost everything works fine in the rom , Below is a list of things which are working fine in the Nougat rom for LG G4 :-
Download Lineage os for LG G4 :- How to Update LG G4 to Android 7.0 Nougat officially
As of now there is no news on the Official nougat update for LG G4 so it is better that you install lineage os rom in Lg g4 to enjoy the latest Android Nougat . The rom is good and as it is a official build so you will also get official updates from time to Time so make sure you keep a eye on the updater app .
So this was our guide on How to Update Lg G4 to android 7.0 nougat, i hope you liked Lineage os rom for LG G4 .