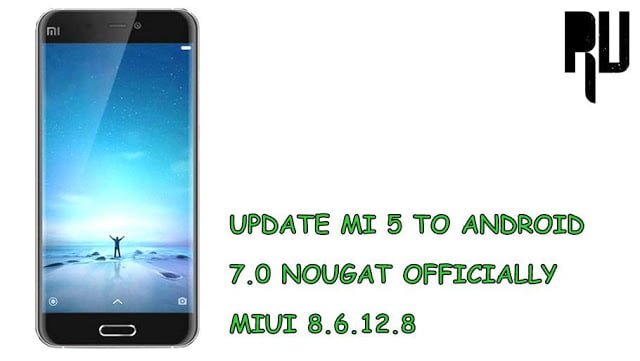 Do you want to Update mi 5 to nougat officially ? if yes then you are at right place . Today we are here with the guide on How to Upgrade Xiaomi mi 5 to Android 7.0 Manually With Miui 8.6.12.8 .
Xaiomi mi 5 is the successor and also the latest flagship device of Xiaomi, The device comes with Snapdragon 820 Processor and 4 Gb of ram . Mi 5 is undoubtedly one of the most powerful android devices and it scored 136875 in antutu benchmark . The Smartphone came with Miui 8 based on android 6.0 marshmallow and now xiaomi is rolling out official Miui 8 based on android 7.0 nougat for Mi 5 .
Xiaomi has started testing Miui 8 based on android 7.0 Nougat for Xiaomi devices and the very first device to get the new update is Mi 5, We have also shared a Guide on How to Update Redmi / Mi Devices to Miui 8 Android 7.0 Nougat . As we all know that Miui is a highly customized variant of stock android so you will not notice much changes in the New Miui 8 based on Android 7.0 . Miui 8 based on nougat comes with some minor upgrades over the one based on Marshmallow . Some noticeable changes we noticed were :-
Xiaomi is also expected to Release the New Miui 9 in Mid 2017 and it is also expected that the new Miui 9 will come with major upgrades and totally different design . we have Also shared a Guide on Miui 9 features and Supported Devices List .
This is the official Nougat based Miui 8 update for Mi 5 so there are no special requirements to update the smartphone, However there are some points you should remember before starting the updating procedure :-

How to Update Mi to Android 7.0 Nougat . You can check Your device’s android version by going in Settings > About phone > Android version . You will see that the android version is 7.0 Which means you have successfully updated your device to Miui 8 Nougat .
How to Update Mi 5 to Android 7.0 Nougat officially

how to win keno

So this was our guide on How to Update Xiaomi mi 5 to android 7.0 Nougat .

keno bc Xender for PC