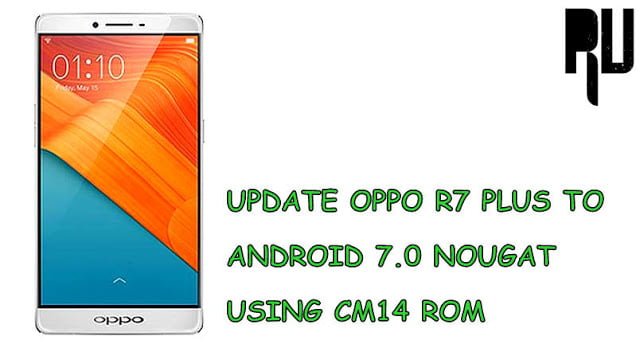 How to update Oppo R7 plus to Android 7.0 Nougat .

Do you own oppo r7 plus ? and want to Update r7 plus to nougat ? if yes then you are at right place . Today we are here with the guide on How to update oppo r7 plus to android 7.0 nougat .
Oppo r7 plus is a huge device with 6.0″ Screen with full hd resolution and 361 Ppi . The device comes with Qualcomm snapdragon 615 and 4Gb of ram . As the smartphone was launched in 2015 so it still runs on android 5.1 lollipop and till now company haven’t released marshmallow for the device So we dont see any signs of official Nougat update for oppo r7 plus .
Android 7.0 is the latest android version which comes with many new features. One of the best feature of Android 7.0 is the multiwindow feature and in this feature you can easily open another app in a window without leaving the current app . There are some more interesting features like System ui tuner, battery management . So lets start the guide On How to Update Oppo r7 plus to android 7.0 nougat . Download and Install CM14 Android 7.0 Nougat in Oppo R7 Plus .

So to update the device we will use CM14 Custom rom . CM14 also known as cyanogenmod 14 is a android 7.0 nougat based custom rom that comes with all features of Android 7.0 .
Cyanogenmod is one of the most popular custom rom, Recent version of their Custom rom Is Cm14 and it is based on android Nougat . The best thing about Cm14 for Oppo R7 plus is that it is the official version of rom from Cm Developers itself which means that you will also get updates with more features in future. The rom comes with features like :-
How to Update oppo R5 to Android 7.0 Nougat .
As this is a custom rom you there are some points and Pre-requirements you have to follow before installing the update on your device :-
How to Use Paytm Without internet on Any mobile .
This is a official Cm14 build from the CM developers itself and everything is working fine in the rom, So you need not to worry about bugs and other issues . Just for a Quick note below are the major things that are working in the rom :-