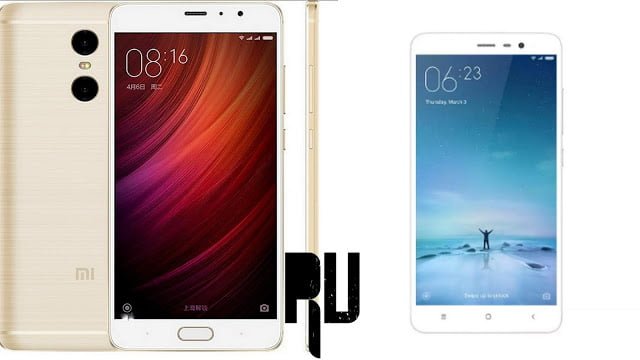 Xiaomi recently launched the Redmi pro in china , The new device is The flagship of redmi series as it comes with many High end features that even the Company’s Premium flagship device lacks of . On the other hand Xiaomi redmi note 3 is the most popular and best selling device from the company . So in this Guide we will do the comparison between the Redmi note 3 and Redmi pro . The Redmi note 3 comes with a 5.5 inch display with a pixel density of 401 pixels per inch and a 1920X1080 resolution . For protection the display comes with corning gorilla glass 3  . The display is equipped with Xiaomi’s very own Sunlight display technology .

The Redmi pro also comes with a 5.5 inch display with 401 PPI and 1920X1080 resolution . There is Corning gorilla glass 3 as well . The thing which makes redmi pro the best Display smartphone in the redmi series is its OLED Display which not only give vibrant colors but also enhances your viewing experience .

Redmi Note 3 :-
The redmi note 3 comes with a hexa core Snapdragon 652 processor Clocked at 1.8ghz . under the hood there is 3Gb of ram . For good gaming and better graphics the smartphone comes with Adreno 510 Gpu unit . Redmi note 3 comes with a Fingerprint sensor at the back which can unlock the smartphone in just .3 seconds . The Smartphone comes with a 4050 Mah battery which last longs upto 8-9 hours with heavy usage and also comes with fast charging technology .
Redmi Pro :-
As we already mentioned earlier that the redmi pro is the Flagship smartphone of redmi series so it is pretty much obvious that the device will come with a Flagship processor .
The redmi pro comes with Flagship Mediatek helio X25 decca core processor , Along with the processor there is 4Gb of ram that makes the Xiaomi redmi pro the best Redmi smartphone ever . The redmi pro runs on 3 Cluster cup which not only delivers High performance but also saves more battery . For gaming and better graphics the smartphone comes with a Mali-T880 Mp4 Gpu which is also better then Adreno 510 . The redmi pro comes with fingerprint sensor at the front home button inspired from xiaomi mi 5 . To power up the smartphone there is 4000 mah battery that can last long up to 1 day with just single charge , Thanks to the 3 cluster Cpu .
So in the Hardware comparison between the Redmi pro vs Redmi note 3 , The Redmi pro is clear winner with much powerfull Helio x25 processor and 4Gb of ram .
Camera :- The redmi note 3 comes with 16 Megapixel primary unit that captures detailed images even in low light . The camera comes equipped with features like Autofocus, Touch to focus, face detection, Smile detection . At the front there is a 5 megapixel camera unit that also comes with autofocus feature and several filters .

So undoubtedly Xiaomi redmi pro is again the winner in the camera comparison between redmi pro and redmi note 3 .