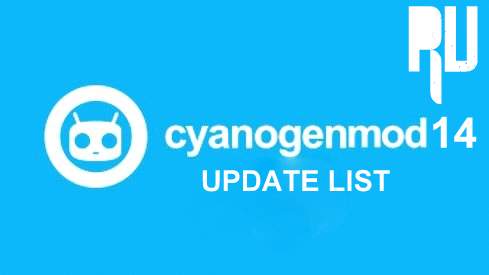 Do you want to Know the names of the devices Getting CM14 Cyanognenmod Custom rom update ? And are you in Doubt that will My device get Official Cm14 update ? if yes then you are at right place . Today in the guide we are here with the list of devices getting official CM14 Update .
We have already Shared the List of Devices getting android N 7.0 Nougat update and today we are here with the Name of devices which will update to CM14 . CM14 also known as Cyanogenmod 14 is the latest version of Custom rom from Cyanogenmod . The Custom rom is based on Android N 7.0 Nougat . CM14 comes with many new features that we will also discuss in the post . So in this CM14 list we will include Samsung, Lenovo, Motorola, LG, Micromax, Xiaomi, Yu, ZTE, Huawei, Asus, HTC, Oneplus, Oppo and all other smartphones that will get official Cm14 upgrade and in addition we will also Tell you a list of the smartphones that are expected to Get Cm14 update .
So starting with t
he Samsung Galaxy S6 and Edge both the devices were launched in 2015 and due to hardware limitations the smartphone will not get official android N 7.0 Nougat Update , But the Galaxy S6 and s6 edge are in the list to get CM14 . The samsung Galaxy Note 5 currently runs on Android 6.0 Marshmallow . Galaxy Note 5 is the last device in the Galaxy Note series that will get official Cyanogenmod 14 support . Moto G4 plus is the first device in the list to get Cm14 custom rom update . The Moto G4 plus is one of the most popular devices under sub 15k segment  . Not only Cm14 but Moto g4 plus is also in the Official android n 7.0 nougat update list . Moto G 3Rd gen is the second smartphone  in the List to Get Cm14 , So after the Cyanogenmod officially releases Cm14 you will be able to Flash it in Your Moto G 3rd gen . Moto X play is a High end device that was launched in 2015 with Lollipop 5.0 out of the box and still it runs on android lollipop . But luckily Moto X play is in the official Cm14 update list . Lenovo K3 note is the first smartphone in the Lenovo list which is confirmed to get Cm14 official Update . The smartphone was launched with android lollipop out of the box and later on the Official android marshmallow 6.0 upgrade was also pushed to the device . So with Cm14 there are certain chances that device will also get official Nougat 7.0 update .
Lenovo A7000 / A7000 Plus CM14 custom rom :- Lenovo A7000 is a mid range with Good hardware specifications and due to its popularity the smartphone is confirmed to Get Cyanogenmod 14 . The Lenovo A7000 plus is the successor of A7000 and it comes with many major Hardware upgrades . So both the smartphones will get Cm14 custom rom .
Lenovo ZUK Z1 CM14 Custom rom :- Lenovo Zuk Z1 was recently launched in india and it is one of the rare smartphones that comes with Cyanogenmod os as their default os . So being an official Cyanogenmod supported device Zuk Z1 is confirmed to get CM14 update . Xiaomi redmi note 3 is the Most selling and most shipped devices in 2016 , The best part about redmi note 3 is its affordable price tag and High end features . The device is officially supported by Cyanognemod developers and it is code named as kenzo , it is confirmed to get CM14 custom rom update .
Xiaomi Redmi Note 2 Cm14 custom rom :- Xiaomi redmi note 2 is one of the first smartphone’s in the world which breaked record of apple in terms of sales . According to Xiaomi 1.5 millions Units of redmi note 2 were sold in just 12 hours . The device is confirmed to get CM14 update .
Xiaomi Redmi 2 prime CM14 custom rom :- 5
Xaiomi redmi 2 prime is the third smartphone in the list to get official Cm14 custom rom update . The smartphone currently runs on Miui 8 based on android 5.1 Lollipop . So after Cm14 you will be able to update it .