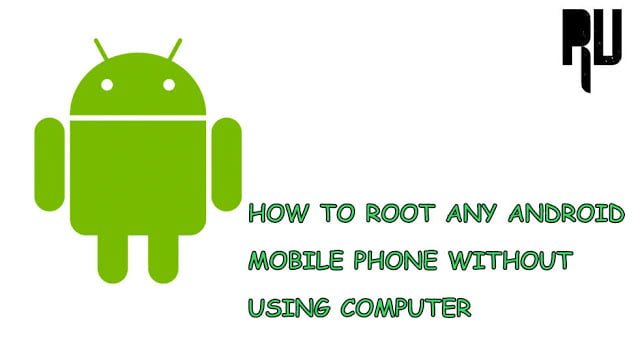 Root Any android mobile Without PC So Do you want to root Android Phone without using Pc? If yes then you are at the right place Today we are here with Different ways to Root any android Mobile without Pc. There are several Different android apps that can root any mobile in just a fraction of seconds and even a beginner can root their device without pc , But with a Computer, you may need well experience and many different tools which may also brick the device. So in this guide, we will tell Different ways with which anyone can easily root android mobile without laptop.

All Android enthusiasts out there know that rooting your phone can unlock whole new doors. A rooted phone means that the user is using it to its full potential. Not only that, but you can even install custom Android on a phone that is rooted. Rooting your device can actually allow you to do a lot of things as we will see later on in this tutorial. If you also want to root your device, then this guide is just for you

So in this guide, we will use several different ways with which you will be able to easily root any android smartphone without a Laptop or computer.

Many users don’t root android smartphones in fear of bricking their device or losing a warranty and at some point, it is valid as well , But when you root your device without pc there are no or very fewer chances that your smartphone will brick because the apps to root android smartphone without pc only works if the smartphone is supported and if they don’t support they simply stop, But in case of Computer the Smartphone gets rooted even if it’s not supported and we end up bricking our devices. So while rooting android mobile without pc we actually don’t need to care about Bricking or any other problem because it is a safe method.

Root Any Android Device Without Computer

Android Operating system is undoubtedly the most popular os and it is used in around 68.4% of devices ( May vary ) . The best thing about android os is that you can do unlimited customization in the device and you can make it the way you want. After rooting android mobile you can do more customization because you get full authority over your android device. You can also install several Best custom roms for Android Phone on a rooted android phone. So after following the guide to root any android device without pc you will be able to flash ROMs and do customization’s in your smartphone.

So in this guide, we will share the best ways to root android mobile without using pc and we recommend you to try each and every step carefully because sometimes it may happen that the app you tried don’t have your smartphone support so you can move on to the second method and root android mobile easily without the need of a computer.

Before going to the main Below are some points and things you should know about rooting.

Advantages of rooting An Android Phone

This is the most asked question by the users before they start rooting is What is the benefit of rooting an android phone. So yes there are many advantages and uses of rooting a smartphone and they are as follows

Increase in performance After your Root Android

Disadvantages After you Root Android phone

Just like advantages, there are some disadvantages of rooting. So it is recommended that you read every disadvantage or Con of rooting an android smartphone.

Sometimes it happens when we select the wrong file and flash it on our android device and after flashing the device gets bricked.

After rooting the device its warranty gets voided and unfortunately, it is one of the biggest disadvantages of rooting an android mobile

After rooting the Device your smartphone will not get official OTA updates from the company anymore and you have to Flash the updates manually.

Sometimes users try to root their devices and they don’t follow the given instructions properly or they flash the wrong file and end up bricking their smartphone so below is the way to avoid bricking of android devices.

How to Avoid Bricking of Android Mobile while rooting

As we all know that rooting android mobile with pc needs some experience but the method to root android mobile without pc is easy, While rooting using a computer sometimes user select a different file or perform the wrong step which leads to Bricking of android device So below are some points with which you can avoid bricking of an android phone

As we all know that after rooting the Device our warranty gets voided which means your smartphone will be no more covered under warranty. You can Also Get Warranty Back After Rooting So if you have rooted your device and you want to get its warranty back then you can get it back by unrooting the device again.

First of all, Go to About Phone > Now tap on Build Number for 5 Times, Now you will get a notification saying you are 2 steps away from being a Developer

Now you will see an Option ” Developer Options ” Just enable that

Now you have to Enable the ” Unknown sources installation ” Option, Here is How to Enable that

First of all, Go to settings Now go to security settings, Now you will see the Unknown Sources option, Just tap on that and Enable it

Root Any Android Os Without PC

You can Root Following Smartphones Using This guide

iroot is also a simple app and it is considered as one of the best to root a phone without pc, All you need is just open the app and tap on root the smartphone and after that, your phone will get root access. Below is the Guide on How to root Mobile without pc using iroot.

Kingroot is a well-known root app, It is one of the most trusted and most-used apps which is Also popular for rooting any kind of smartphone. Now with the Kingroot app, you can easily root your android phone and the best thing is that this is Without the computer rooting method, So below is the guide on How to root android phones by kingroot android app.

Towelroot is the smallest and lightest app present to root most smartphones easily, This app was basically created to root Samsung devices but still, it works on many android mobiles to root them. So here is the guide for rooting android phones by towelroot.

Kingroot and kingoroot apps look identical but they both are different, The best thing about the Kingoroot app is that there is a Desktop version also present of the Kingoroot app which has a high success rate of rooting android phone So if the user fails to root by this app can use the desktop app as well, So let’s start the guide on How to root Android phone without a computer using Kingoroot app.

Root Any Android With Using Computer

Now You can Also Root Any Android mobile without a PC Even if that’s a Qualcomm Qloader Driver Supported smartphone, There are Many Smartphones that Come up With Custom roms and they have an inbuilt option to Enable root. So if you have a smartphone that comes with Custom ROM you can simply Enable root on Android, But if not you can follow the guide.

Most of The Devices Can Be rooted using this guide, Incase if you weren’t able to root your Smartphone you can Comment down below and we will update the Guide with your Smartphone’s rooting Method in 2022

Trying These root Methods in 2022 Will definitely help you to get root access in Your android smartphone carefully, Also don’t worry about voiding the warranty.

Also, it is important that you always install TWRP recovery on your Android phone to Root your android device without PC, Rooting the smartphone using TWRP recovery is considered one of the best methods.

So this is How you Root Any Android Mobile Without a PC. In case if you Have any Doubts feel free to write them down in the comments section below.