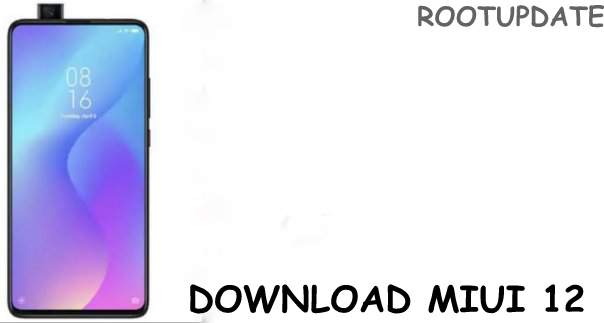 Miui 12 Download for all Xiaomi Phones: In this guide, we will share the easiest way to Download Miui 12 for all Xiaomi phones. Mi recently released the new version for their Os named as Miui 12. The new update is expected to come with many new features and it is also said that the new update will look like Apple’s IOS 12 in terms of Gestures and Overall appearance.

Xiaomi devices Are popular among all android users because they come with Good hardware and Miui Software support, As of now, Xiaomi is planning to launch the new Redmi Note 9 Along with the Miui 12 Os. So if you are using the Old miui 11 it’s now time to change your software to the latest Miui 12.

As we already told You that Xiaomi is planning to launch the new Miui 12 and we have already made a guide on Miui 12 Supported devices List, you can also check if your device is there in the list or not. if your device is on the list then you can Download Miui 12 for Redmi or mi Phone easily.

You Can Download Miui 12 Rom for all Xiaomi phones from the Given Options below, Also just make sure that you also read the How to Install Miui 12 guide from the installation Section. As of now, Xiaomi has only Announced Miui 12 Update which means no Update has been rolled out for users or public.

The Update will be rolled out in Such a phase that first, all the Developers will get the Update to test their apps and Compatibility with the new Miui 12 Update, After that All the Beta testers will get the Miui 12 Beta rom which will contain some bugs. And in the last Phase, all the Users will be able to Download Miui 12 for their Android devices.

Miui 12 developer rom is the Latest Version of the rom which is in the Development Phase, This rom is suitable only for Developers who are trying to test Their Apps on the latest version of Miui 12. So you can Download Miui 12 Developer rom from Below; [Also the Link Will Be Updated Soon]

Miui 12 Beta rom is the new version of the Latest Os, This rom can be Downloaded by Anyone but with Proper care. This rom Might Contain Some bugs and some users might face using this Miui 12 as Daily driver. All the Users who are interested in Download Miui 12 Beta rom can Download from Below.

How to Install Miui 12 Officially

If you are the one who doesn’t love Bug and the Xiaomi device you are using is your primary device, then we will recommend you to wait for some time and Directly download the Stable version of Latest Miui 12. All the versions of rom which will be released before the official launch might have some bugs and as a result, you may get irritated using a smartphone with Bugs.

Many users have downloaded the New Miui 12 Rom using our guide, in case if you have any smartphone that runs on Miui 12 you can easily follow this Guide.

Xiaomi has announced that the New Miui 12 will be released Along with the Redmi Note 9, So if you are waiting for Miui 12 then you might get It with The All-New Xiaomi redmi note 9.

Also, there is one more way with which you can install the latest version of the OS on your Xiaomi Smartphone, sometimes many users also get an OTA update which lets you install the update directly from your Smartphone which means you don’t need to Download rom from the website. You can just tap on Install the Update and the Update will be installed automatically.

The global launch of Miui 12 Will take place on 19th May which means most of the devices will be able to get the update on their Xiaomi Devices for sure. The update will be rolled out VIA OTA for your smartphone however you might face some delays. So you can also update your phone using the Manual installation way.

In the Statement, Xiaomi Stated that there might be some delay in the release of the New Miui 12 because of Chinese festivals going on, However, Some of the Xiaomi and Poco devices also started receiving the Stable update on 30/06/2020.

Update for Poco F1 has been Delayed till November, However, If you want to update your Device now you can always use a custom ROM based on Android 11. Also if you want quick update you can Always flash beta rom on your device