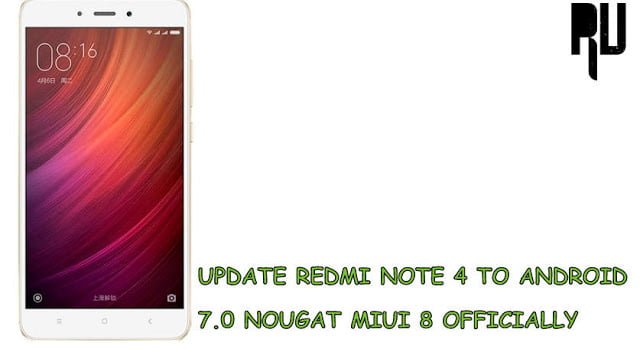 Redmi note 4 Qualcomm is a newly launched device and the smartphone comes with Miui 8 based on marshmallow, But still there is a way with which users can Install nougat on Redmi note 4 manually . So in this guide we will tell you The official way to Update redmi note 4 in Nougat .
List of Xiaomi Devices Getting MIUI 9 Update.
Xiaomi redmi note 4 is one of the first xiaomi devices that got official nougat update from the company itself, but the nougat update for Redmi note 4 is in beta phase which means that there are some chances of bugs in the rom . But as this is the official update so you will get regular ota updates from the company which will solve all bugs .

How to Root Xiaomi redmi note 4 Without pc.
Before you update redmi note 4 to nougat below are some points and pre-requirements you have to follow :-
Download Redmi Note 4 Nougat Firmware .

How to Update Redmi note 4 Snapdragon to Android 7.0 Nougat How to Update Redmi Note 4 to Android 7.0 Nougat officially

So this was our guide on How to Update redmi note 4 to android 7.0 Nougat Manually, As the firmware is all new so at this time it is only possible to flash it using Mi flash tool . After some time Nougat OTA Update for redmi note 4 will be released for public .